The idea of establishing an internationally based pain institute came from Prithvi Raj in the early 1990s. During an annual meeting of the Turkish Pain Society in Istanbul in 1992, Raj first proposed the idea to the late David Niv and Serdar Erdine.

This project sounded very appealing to these two, as did the opportunity to work with Raj. They immediately accepted the offer, and the journey towards establishing an international institute had begun. Niv and Erdine visited Raj in Atlanta and met with some financial contributors to establish the International Pain Institute (IPI). These first efforts did not work outas expected, so the three continued alone and added Ricardo Ruiz-Lopez and Gabor Racz to the team.

The first meeting of the original members of the WIP happened over beer and spirits in a bar after a gruelingsession on pain management at a conference. It was an unlikely group of physicians gathered from vastly different parts of the world: Israel, Turkey, Spain, and the USA. 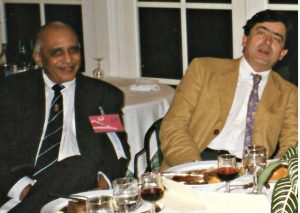 FIG 1A: RAJ AND RICARDO IN EARLY MEETINGS IN 1990S AS THE FEASIBILITY OF THE NEW SOCIETY WAS CONSIDERED

FIG 1B: SERDAR AND DAVID IN EARLY MEETINGS IN 1990S AS THE FEASIBILITY OF THE NEW SOCIETY WAS CONSIDERED

Talk turned to a series of lectures they had all been listening to, “Pain Sessions,” which discussed updates in the study of pain management. The lectures in that session emphasized the concept of a multidisciplinary model for pain management and credited a newly formed pain society, the IASP. In 1976, IASP was created to further the “study of pain.” At the time, not much was known about pain management, the etiology of pain syndromes, or the diagnosis, management, and outcomes of chronic pain.

FIG 2: INITIAL MEETING OF THE THREE DISCUSSING THE FORMATION OF THE SOCIETY

The next step was to convince the leaders in pain medicine at that time to join this first core group. It was not easy. Discussions took place during many pain management society meetings in the USA and at the IASP world congress in Paris in 1993.
A feasibility meeting was held on April 19, 1994 during the Sixth International Pain Congress of the WSPC organized by Raj in Atlanta.

At this gathering, the group’s discussions centered on the validity and effectiveness of the IASP concept and the medical education of pain physicians.

Some in that group (Prithvi Raj, David Niv, Serdar Erdine and Ricardo Ruiz-Lopez) challenged the IASP’s assertion that pain management should mainly be performed by Neurosurgeons, Psychologists, and PM&R Doctors and that the study of pain should be mainly directed by the Basic and Neuro Sciences group. Anesthesiologists, in the opinion of the IASP hierarchy, were not qualified to be pain specialists, since patients were not directly referred to the anesthesiologists for their clinical practice.
Among the four original founders of the WIP, three were Anesthesiologists and one was a Neurosurgeon. The group reflected that the IASP’s conclusions were biased, even though the IASP was started by John Bonica, a prominent Anesthesiologist, and over 60% of IASP members were also Anesthesiologists. After further discussion, the group agreed that there was a dire need for education and training programs for pain management physicians. They decided to find a solution for this inadequate medical education. They agreed, as Bonica had said, that pain management should be multidisciplinary. The standardization of pain management education across the globe was essential, and the time had come to remedy this deficiency. Their concept, vision, and mission were put down on a napkin, and a new society was formed. It started as IPI, the International Pain Institute, and would later become the World Institute of Pain.
Initial Follow-Up

FIG 5: INTERNATIONAL MEETING OF EXPERTS TO DEVELOP A NEW NAME FOR SYMPATHETIC PAIN AS CRPS 1 AND 2. IN MALIBU, CA 1994

After 1993, the original four WIP members had met at their own cost during several pain management conferences and meetings all around the world to discuss the formation of the new society. Raj wrote a letter in 1994 to ask Gabor Racz to join as a Founder of this new society, because he was an expert in the field on Pain Medicine and had an international reputation. After consulting with others, they realized they needed to register in the US to become an official society. They began the IRS labeling process to become an official non-profit charitable organization to further medical education in pain management. Since one of the original members, Prithvi Raj, was living in Los Angeles at the time, they applied to register the society in California and christened it the “International Pain Institute” (IPI).

The early years of running the IPI took a toll on the clinical practices of its founders. They had already incurred many expenses in order to travel for organizational meetings, and thousands of additional dollars were needed to legally register the society and become a non-profit organization. The group determined that the only way they could move forward was to secure donations from the original board members of at least $1,000 each. Nine board members were identified, and they agreed to donate the required amount to register the society.
Initial agenda of IPI

The first task of the society was to create an executive board and set a time and place for the first official meeting.
The members chose Los Angeles for this historical first meeting of the board in November 1994. The officers attending were Prithvi Raj, David Niv, Serdar Erdine, Ricardo Ruiz-Lopez, Gabor Racz, Michael Stanton-Hicks, Richard Rauck, Elliot Krames, David Leak, Winston Parris and the legal counsel. Nine officers were elected to the IPI board: Prithvi Raj as President, David Niv as Vice President, Serdar Erdine as Secretary, and Ricardo Ruiz-Lopez as Treasurer. Gabor Racz was elected to promote the society’s mission, especially the cadaver workshops for medical education, which he was already doing in his home city of Budapest and at Texas Tech University in Lubbock, Texas.

The World Institute of Pain (“WIP”) was incorporated on August 11, 1995 to serve as an industry group for practitioners of pain management worldwide. When WIP was first established, the founding members adopted bylaws (the “Bylaws”) to govern the management of WIP. As WIP continued to grow and expand its influence across the globe, changes to its management structure were necessary and the Bylaws have been previously amended. Throughout the history of WIP, the Bylaws were established in 1994 and amended in years 2002, 2007 and 2010.

Over the next few years, the World Institute of Pain became familiar to all pain physicians, especially those specializing in interventional pain management. The mission of WIP had been established as an institute for better collaboration among pain centers. In order to establish continuity on the executive board, instead of the position of vice­ president, it was decided to establish the posts of president-elect and immediate past president. Furthermore, the same person could no longer be elected for the same position a second time.

In May 2003, a position description was developed for the position of Executive Secretary to provide administrative support to both the Board of Directors and the Board of Examination for FIPP. December of 2003, Mrs. Mary Pasewark was hired to work from her home and served until her resignation in February 2005. Mr. Nasos Vassilou was subsequently hired as the Executive Secretary for the examination.

The arrangement with Mrs. Paula Brashear, secretary to Gabor Racz at Texas Tech Health Sciences Center in Lubbock, Texas, was formalized September 7, 2005. At a meeting of the WIP Board of Directors, Prithvi Raj reviewed the need for the organization to have effective secretarial support. Gabor Racz, who had assumed the presidency, expressed his preference to use his secretary, Paula, to help with the administrative support efforts associated with planning the 2007 World Congress in Budapest. Some monies were required to support her efforts.

Furthermore, Raj proposed that Paula work with Serdar Erdine who at that time was Chairman of the Board of Examination. Working with Paula, it was proposed that Mr. Nasos Vassiliou continue to be the liaison with Kenes International, the Professional Congress Organizer (PCO) for the World Congress; and Ms. Petra Freyler of Budapest, Hungary (and Dr. Racz’ niece) would be the local organizer to help with the Budapest arrangements. Gabor Racz was charged with the responsibility of developing job descriptions for Petra and Nasos; their salaries were paid by Kenes International. A long-term solution for a full-time Executive Secretary was discussed at that time and Gabor Racz, Serdar Erdine, James Heavner and Richard Rauck were asked to make recommendations.

In 2007, Prof. Serdar Erdine recommended and the Executive Board unanimously agreed to commit the necessary resources to establish a proper, professional office for the executive secretary. Having been given the authority to recruit a full-time Executive Secretary, Richard Rauck made the offer and negotiated the terms of employment with Ms. Dianne Willard, who became the first full-time Executive Secretary and now Executive Officer of WIP. Concurrent with this employment agreement was the establishment of the official offices of WIP in Winston-Salem, North Carolina, USA. Dianne began working in the fall of 2007, the first three months from her home until office space could be identified within the offices of Richard Rauck’s Carolinas Pain Institute and the Center for Clinical Research. She worked from a single office for about two years.

During the following years, the interest in the examination for certification as Fellow of Interventional Pain Practice (FIPP) had grown all over the world and the FIPP alumni had begun to be an integral part of World Institute of Pain. In order to integrate these alumni, the WIP made a revolutionary step towards the future with the structure of the WIP completely changed with the Bylaws of 2007.

a. Every country or region having at least five FIPPs received the right to form a section, represented by a chair of the section, and a secretary and a treasurer.
b. A governing council was formed of the chairs of all the sections and the executive board.
c. The council became the supreme structure in WIP.
d. The sections were given representation on the council with the chair of each section having the right to vote within the council.
e. The council received the right to vote during the election process.
f. The election process was completely changed.
i. In order to elect the officers, all FIPP alumni received the right to propose names at the beginning of the election process.
ii. Those names for the officers of president-elect, honorary secretary, honorary treasurer; and at-large directors of chair of board of sections and chair of the advisory board are subsequently decreased to two candidates per position by the executive board to be voted on by the members of the council consisting of the executive board and section chairs.

These changes altered the whole profile of the World Institute of Pain, helping it to grow into a stable society where all bodies attend to the decisions.
In late 2009, the Executive Board authorized the hiring of a full-time Examination Coordinator to provide essential assistance to the Board of Examination, and eventually to assume full responsibilities for the program. Mr. David Mark Tolliver, whom Dianne had worked with at their previous employer, was authorized to offer him the position and with negotiation assistance from Richard Rauck, Mark was hired and began working in February 2010.